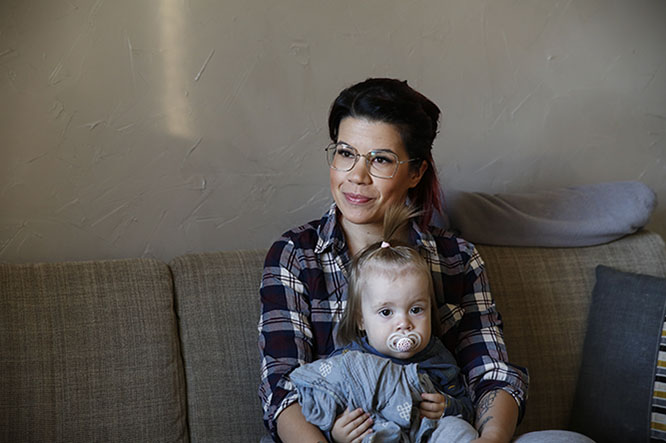 After her divorce last year, Ida Paarnio was in debt and found herself wondering how in the world she could provide a proper Christmas for her children. What helped her out was a Good Holiday Spirit gift voucher.

This year, food prices are at a record high. Rising costs hit hardest those who are already struggling. In 2022, Finland has 30,000 more children of families in need than there were last spring.

‘Everything is more expensive. Grocery prices are up, and the electricity bill is twice what it was. When unavoidable costs go up, you have to cut back elsewhere. On a small income, there is no other way,’ says Ida Paarnio from Vantaa.

‘For now, we’re OK, but life is that much harder.’

Paarnio is a stay-at-home mother with three of her own biological children and a total of five children in her new family constellation. In her blog Elämänmakuinen matka (roughly Tasting Life While Living It), she has written publicly about getting into debt and her everyday life as a single parent in a family of limited means.

Paarnio’s financial problems began in 2015 when she split up with the father of her oldest child. Working in childcare, she became the main carer of two small children. The apartment she had shared with her husband was sold and she had to start everything anew.

‘Before the divorce, we owned a home, we had a car and credit cards,’ said Paarnio. ‘After the divorce, I was so exhausted that I didn’t do what a sensible adult should have done. To the end, I tried to take on the same costs we had had in a two-parent household.’

Little by little, she got into ever more debt. The first enforcement letter came in the mail, then another. Finally, Paarnio had a five-digit sum registered in the enforcement service.

‘It was a horrible situation. Until then I had thought that payment default entries were something that only happened to others, that those who end up in such a situation are somehow second-class citizens. And suddenly I found myself in that situation. I was so ashamed.’

Paarnio hit the wall in 2017. She was forced to admit to herself that there was no way she could handle her debts. She got in touch with debt counselling and applied for restructuring of private debt.

It was a heavy process, with evaluations, follow-ups and plans. Last year, the district court approved Paarnio’s application for debt restructuring. At the beginning of this year, the payment plan took effect. Paarnio says that without the debt restructuring, she would never have got out of debt.

Last year, she hit bottom in another sense. Running a household with a little baby and two school-aged children took so much out of her that she couldn’t be the kind of mother she wanted to be. Exhausted, Paarnio argued with her children and afterwards hid in the bathroom to cry.

‘In the end, I called child services and filed a protection notice for the situation. That is what saved our family,’ says Paarnio.

Social services provided Paarnio with a supportive family worker and help with chores from the home services for families.

‘The family worker still comes once a week. She is our family’s very own “supernanny”.’

Instead of giving in to feelings of shame, Paarnio encourages others to be proactive about getting help when they are running out of steam.

Thinking ahead is key

Today, Ida Paarnio is doing better than she has in years. Money is still tight, but the economy is in balance. A new man in her life, with two children of his own, is shouldering his share of responsibilities.

‘I’m still on home care support, and on top of that there are child benefits and child support, and my partner works part-time. It doesn’t pay for the high life for seven people, even though there are now two of us adults,’ says Paarnio with a smile.

‘But it is wonderful to have someone who understands to share everyday life with. It makes it so much easier, that we have both been single parents and struggled with the same things,’ says Paarnio.

‘The key to getting by on limited means is planning ahead,’ she adds.

‘These days I do a spreadsheet budget for each month and enter all of our expenses. After the cost of housing, utilities, and debt payments I look at how much we have left for everything else. The food budget I draw up on a weekly and sometimes daily basis.

‘We make sure we always have enough food in the cupboards and that we can handle an unexpected bill. We put a bit aside as a buffer for unexpected costs.’

When shopping for food, Paarnio saves by making use of special offers and buying in bulk. Shopping trips are carefully planned. All food at home is made from scratch, but occasionally the children are treated to eating out.

Saving a Christmas in need

Right now the seven-person Paarnio family is getting ready for Christmas, the biggest festivity of the year. This year, Paarnio started in good time to save for Christmas.

Last year, her situation was different. Back then, worrying about how she could provide a proper Christmas for her children had kept her awake at night. Relief came in the form of a EUR 70 food gift voucher from the Good Holiday Spirit campaign, which Paarnio had received thanks to social services before Christmas.

‘For some people, EUR 70 might seem a small sum, but for us it was a lot. That made it possible to have a wonderful Christmas dinner and the kids could have a bit more under the tree from the money I had,’ says Paarnio gratefully.

‘For many people in need, the Good Holiday Spirit gift voucher is what saves Christmas. This year it will be even more important, because everything is so expensive, but the benefits are the same as ever.’

The article was published in the Red Cross magazine Avun maailma 4/2022.