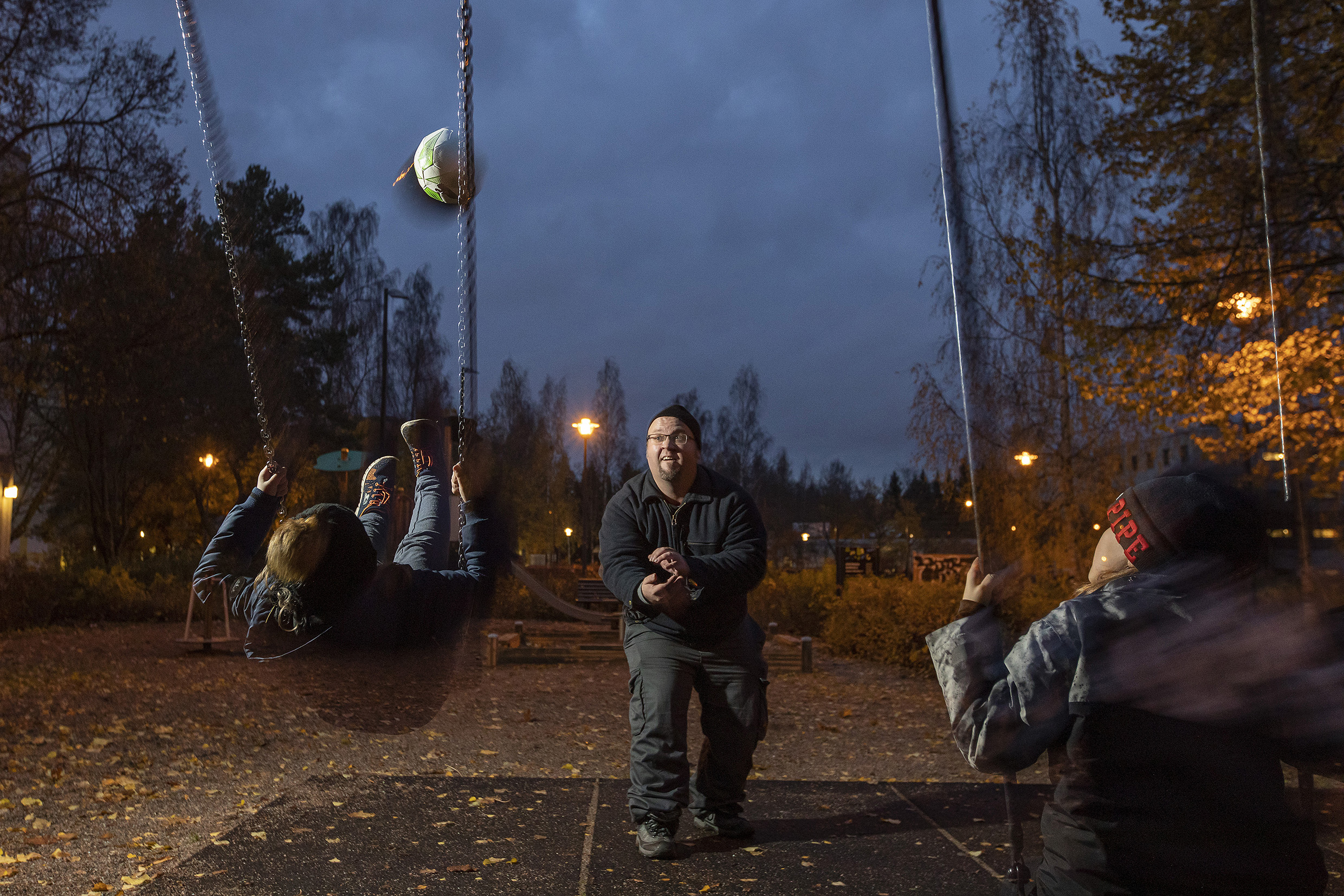 Father of two sons, Ari-Martti Hopiavuori, was left high and dry after he became ill at the worst possible moment. A Good Holiday Spirit voucher saved his Christmas.

According to studies, up to 150,000 children live in poverty in Finland. There are many factors behind their families’ low income. One in four single-parent families is a low-income household. Unemployment, disability, health problems and excessive debt are just some of the reasons that cause poverty.

Although financial difficulties are common in Finland, they are also always cause for concern and guilty feelings.

“Yes, it’s very stressful that I have to constantly calculate whether I have enough money to buy food for the rest of the month,” says Ari-Martti Hopiavuori.

“For me, managing my finances means that if I take the boys out for pizza one day, we eat cheaply at home for the rest of the week. We simply go without trips and other more expensive things like theme parks.”

Talking about money does not bring in more money, but talking about money worries can make you feel better and perhaps encourage you to seek help. That is why Hopiavuori wants to talk about his situation. The stigma associated with money worries needs to be overcome. Not everyone is the architect of their own fortune, at least not by themselves – Lady Fortune has an influence on people’s lives.

Hopiavuori, 38, who lives in Vantaa, is a student, information systems specialist, activist and father of two sons. Hopiavuori’s sons were born in 2008 and 2010, and they live alternating weeks with their mother and father. The parents divorced in 2014.

“We have this alternating week system, and the boys stay with me for two weeks at a time during the summer holiday. They spend alternate Christmases and other holidays with each parent,” Hopiavuori explains.

In practical terms, this means that Hopiavuori is a single parent every other week. He really puts effort into those weeks, but money can be tight. Hopiavuori has managed for a year with sickness allowance and income support after he suffered from burnout.

In 2011, Hopiavuori completed a degree in information systems. After temping for a few years and working in another field, he decided in 2015 to study information and communication technology at Metropolia University of Applied Sciences. The decision was influenced not only by his desire to find a more interesting and better paid job, but also by his family situation.

“In my last job the working hours were quite random so I had to quit. Studying is more flexible, and I was able to continue to work later in the evening.”

However, his studies, which were advancing very well, were interrupted by his illness.

“I started writing my thesis in summer 2019, but in November I started to feel unwell when I looked at my computer screen. I was so stressed out that I suffered from burnout. I was also diagnosed with ADHD, which increases the stress,” says Hopiavuori.

“I’m on medication now and I’ve started therapy in which I learn how not to become too stressed. My goal is to complete my studies in January and graduate in June. I’m sure I’ll find a job after that.”

Fortunately, Hopiavuori’s current home is a very affordable student flat, so his housing allowance is enough to cover the rent. Two bedrooms are enough space for three.

All non-essential purchases are kept to a minimum, and Hopiavuori tries to take advantage of offers in the supermarket. He doesn’t really eat out. The menu at home consists of pasta and minced meat, rice and chicken – inexpensive basic ingredients that the boys love.

Hopiavuori supports his elder son’s floorball hobby by volunteering and acting as the team’s treasurer and as an official at games. Both boys are passionate players of computer games. They play on a console at their mother’s and on a PC at their father’s.

“Child benefits and maintenance go to my ex-wife, so we have agreed that she pays for the boys’ phones. We split the cost of the boys’ bus tickets, and I try to pay my share when we need to make a bigger purchase, like a bike, maybe once a year.”

Hopiavuori uses public transport in Vantaa and a bicycle in summer. He has not had a car for years. He could not afford one in the current situation, but it’s also a choice based on values.

“I don’t think I’ll buy a car even when I’m back in work again. If I need a car a few times a year, I can always rent one. It’s an ecological issue.”

Hopiavuori is now involved in activism in his spare time. He is the chair of an organisation for divorced parents, and he is also involved in the Pirate Party and the parents’ association at his sons’ school.

A gift that saved Christmas

Although he is in a tight situation financially, Hopiavuori emphasises that he does not live in misery. He has to be careful with his money and not spend it on anything non-essential, but he enjoys doing things with the boys. Things are getting better.

His faith, however, was put to the test last year. Hopiavuori had just started sick leave, and managing with sickness allowance and other income was difficult. The boys were going to spend Christmas with him, but he did not have any money. Social services said that Christmas expenses were not a basis for additional income support.

“It looked like I’d have very little money for Christmas. I didn’t have a penny to spare.”

Hopiavuori was saved by the Good Holiday Spirit voucher provided by social services in Vantaa.

“The voucher paid for our Christmas food and some treats. I made the carrot and swede casseroles myself, and I cooked rice pudding and mixed fruit soup. The boys and I baked gingerbread men and star pastries. I was doing a vegan challenge at the time, but I bought a small turkey roll for the boys. I had to be careful with the money, but we didn’t want for anything. There was even a little money for the boys’ gifts.”

“That voucher really came in handy. I’d say it was a life-saving gift!”

The article was originally published in Avun Maailma magazine.