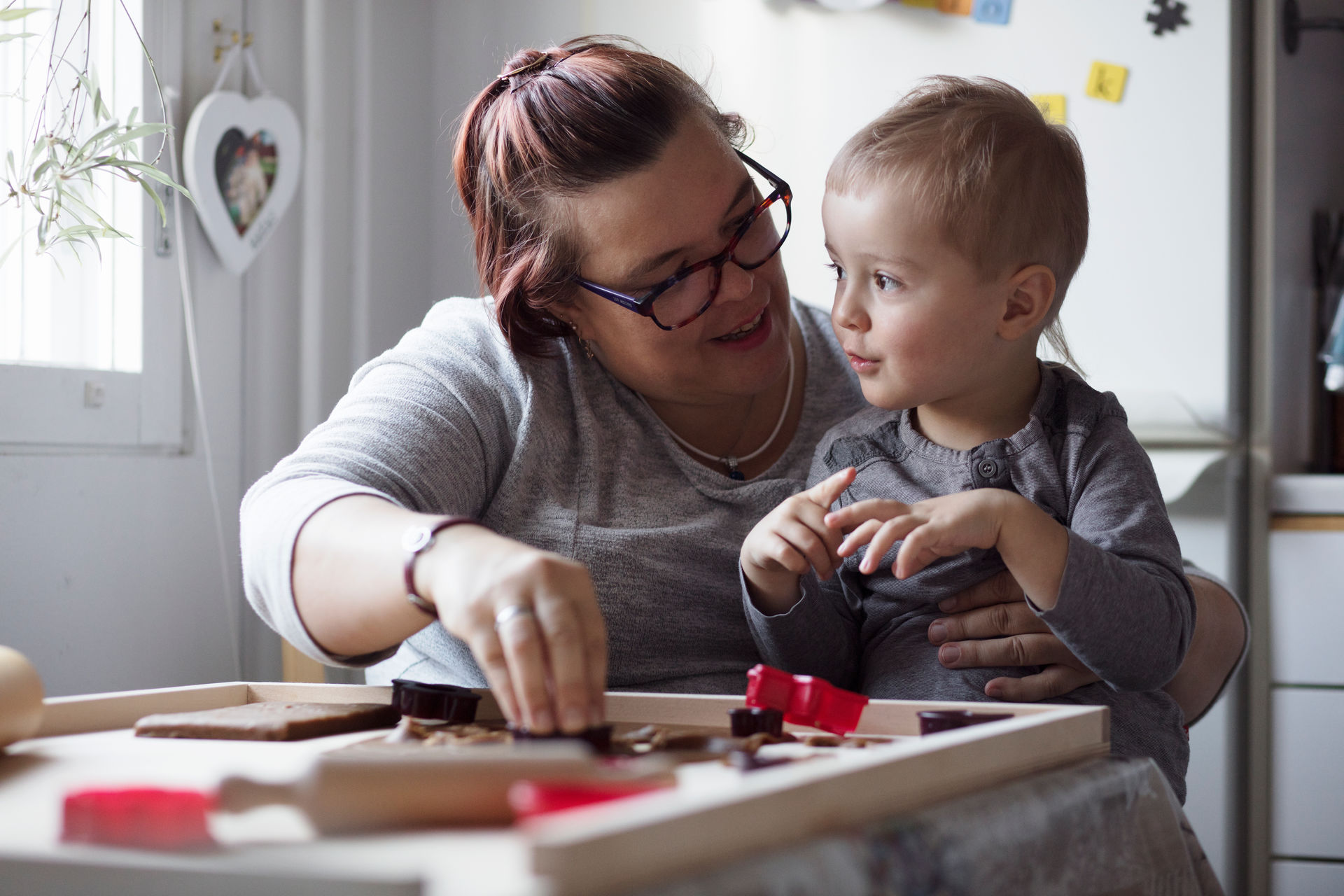 Johanna Türkmen stayed at home to look after her son Rasmus even though it meant that the single parent’s income would plummet. The Good Holiday Spirit food voucher was a welcome addition to the low-income family’s Christmas.

Johanna Türkmen pulls the first batch of gingerbread biscuits of the year from the oven and puts it down to cool on the small kitchen table. Outside the window, the lawn is still tenaciously green. The autumn has been warm even in Ilmajoki, South Ostrobothnia.

‘This is where I was born, I’m a native of Ilmajoki,’ Johanna says.

‘Studies and life took me to the south in 1993, and I stayed there for over 20 years. After all, the employment situation was a lot better there. In Vantaa, I studied to become a practical nurse and worked in a range of positions.’

‘Then Rasmus was born, and I had to get back to the countryside and closer to relatives.’

‘Rasmus’ birth was a small miracle to me. I had long hoped for a child but had almost given up hope. Maybe that’s one reason why I decided that I want to focus properly on being a mother, look after the child at home and be with him as much as possible.’

That is what Johanna did, even though it came with a cost as a single parent. Johanna, who had done odd jobs before Rasmus was born, was left with the child home care allowance after the parental allowance period. The maximum allowance is 519.47 euros per month, minus taxes.

Support for those in need

According to statistics, over 100,000 children in Finland live in low-income families. According to all poverty indicators, single parent families are the most vulnerable. Just like Johanna and Rasmus.

Poverty is not usually talked about in Finland because it still involves shame. Help is not easy to ask for.

‘Personally, such thoughts have started to fade. You really have to humble yourself,’ Johanna laughs.

‘You look for support where it’s available. That’s why it’s there. On the other hand, this has been my own choice. Of course, I could have started to take Rasmus to day care when he was six months old and go to work myself, but it did not feel right.’

In addition to the child home care allowance, Johanna has been receiving housing allowance and social assistance. Even so, it is difficult to make ends meet. Rent takes a large portion of the income, and you have to have some kind of a car in Ilmajoki.

‘Life is a constant price comparison; how to make ends meet. We take advantage of all sales and discounts, flea markets and recycling,’ Johanna describes.

‘I’ve had to stop going to the hairdresser’s, and travelling has been limited to visiting Rasmus’ godparents in Vimpeli,’ Johannasays and contemplates that she and Rasmus are, however, lucky because they do not have allergies, for example – a gluten-free diet would be expensive!

According to surveys, low income reflects on families’ lives in many ways. Money troubles burden both parents and children. Johanna also recognises this.

‘When there’s very little money, you stress about it all the time. I put Rasmus before my own needs. Then I just decide to make do without my needs for a little longer.’

Then again, you rarely need to buy new things for a child, since plenty of recycled clothes are available. For now, at least.

As children grow older, money trouble often grows as well. Low income limits hobby possibilities, for example. Johanna has thought about this too.

‘You do think about what hobbies cost these days. Icehockey or football equipment and licence fees, for instance. Luckily, a strong sport here in Ilmajoki is wrestling; it does not require a lot of equipment. Rasmus and I have already been going to Nallepaini wrestling. That provides exercise for the mother, as well.’

Another inexpensive hobby has been the activities of the Ilmajoki association of the Mannerheim League for Child Welfare that Johanna joined last year. She has even become a club leader.

When money is tight, even a little extra has an impact. Like the Good Holiday Spirit voucher from the Red Cross and the Mannerheim League that Johanna received through the municipal social services.

‘It was a very pleasant surprise: an extra Christmas present,’ Johanna praises.

> Donate as a private person

> Donate as a company