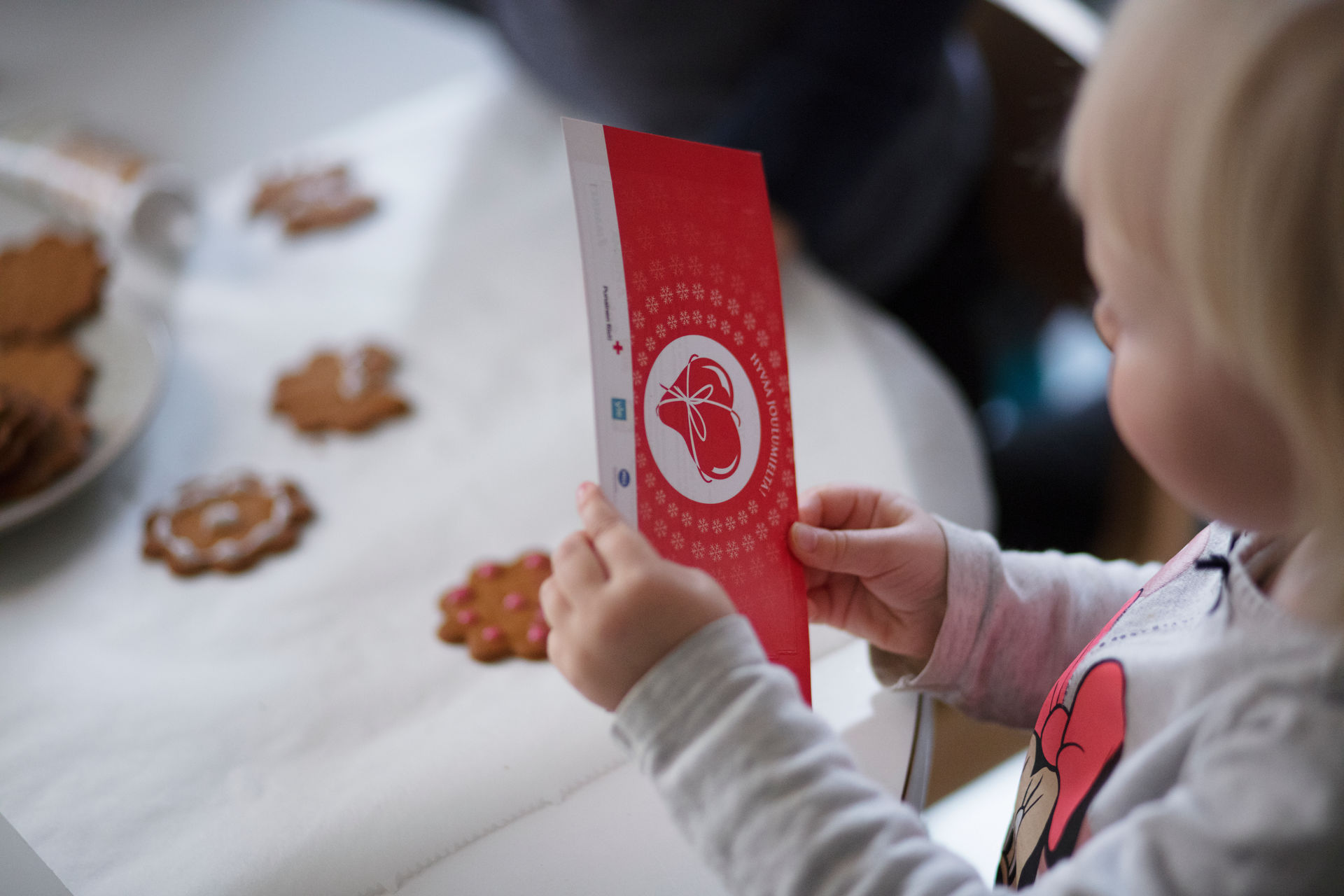 In Finland, poverty affects about 110,000 children. Childhood poverty will affect young people’s transition into independence and have consequences manifesting during their adulthood. The Good Holiday Spirit collection by the Finnish Red Cross and the Mannerheim League for Child Welfare for impoverished families with children will be launched on 22 November. The collected funds will be used for distributing 28,000 food vouchers that help families with scarce resources to have a festive holiday meal.

The improving economic situation in Finland is not reflected in the poverty of families with children, which keeps climbing. Now is the final moment to invest in long-term child, youth and family policies to prevent the effects of childhood poverty from accumulating from one generation to the next.

– The basis for wellbeing is built during childhood. Family situations vary, but livelihood should secure a valuable life during all life situations, says the leading expert of child and family policy of the Mannerheim League for Child Welfare, Esa Iivonen.

As the children grow older, the financial pressure becomes stronger. For young people, poverty is also reflected in their friendships in special ways.

– Young people coming from families with scarcer resources have fewer close friends than their peers. The experiences of bullying are also more common than for others, says Leena Suurpää, the Manager of Finnish Red Cross Youth Shelters.

The poverty of families is strongly transmitted from one generation to the next. Due to this, helping requires long-term work. One of the vital moments of interrupting the spiral of poverty is when a young person who grew up in a family with scarce resources is about to become independent and move into their own home.

– The state, regional authorities and organisations should invest in low-threshold services that reach these young people at the right time – not only during their childhood and teenage years, but also during their transition into independence. At the same time, we must support the young people’s ability to participate in the decisions concerning them, Suurpää states.

Observations made at the Youth Shelters prove that young people feel that support is most impactful when they are assisted in building a safe community around themselves instead of being just steered towards the service system.

– Encouraging young people in different life situations to take part in the operations is also a challenge for us as organisations, says Kristiina Kumpula, Secretary General of the Finnish Red Cross.

– In civic activities, the young people can also give help in addition to receiving it.

This year, the Good Holiday Spirit collection by the Finnish Red Cross and the Mannerheim League for Child Welfare will be organised for the 22nd time. The campaign will be carried out in collaboration with YLE Aamu-TV, YLE Radio Suomi and YLE Radio Vega.

The goal is to collect about two million euros as donations. The families that need help will be selected by, for example, regional social authorities, child health clinics, school healthcare, diaconal work of the parishes, the branches and Youth Shelters of the Finnish Red Cross and the local associations of the Mannerheim League for Child Welfare.

The funds donated to the Good Holiday Spirit collection will be used to purchase 28,000 vouchers, which impoverished families with children or families going through a difficult life situation can use to buy food items for the holidays. The vouchers have a value of €70 and they can be used in the campaign’s partner stores, i.e. stores operated by Kesko, Lidl and the S Group.

The collection will start on Thursday 22 November 2018 and will continue until 24 December 2018. On the opening day, 22 November the YLE Aamu-TV morning show will broadcast a programme from Helsinki Railway Station, featuring opera singer Waltteri Torikka. YLE will talk about the Good Holiday Spirit collection in its broadcasts every day until Christmas Eve.